Meteorologists at the U.S. Naval Research Laboratory plan to take a harder look in 2020 at a prime, yet difficult to model, component of the global water cycle known as atmospheric rivers. 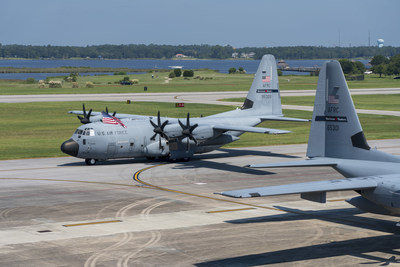 Rivers in the sky, sometimes known as the Maya or Pineapple Express, account for most of the horizontal moisture transported outside of the tropics – the Tropic of Cancer and Tropic of Capricorn – and even up into the Arctic.

Horizontal moisture transport is water moving from east to west or north to south, as opposed to moisture moving vertically from the ocean to the atmosphere.

“These narrow rivers move a significant amount of water through the air, even though they take up a relatively small area,” said Carolyn Reynolds, Ph.D., head of the Probabilistic Prediction Research Office at NRL. “Large atmospheric rivers can transport as much moisture as the Amazon.”

On average, just a few atmospheric river events are responsible for 30 to 50 percent of the annual rainfall on the West Coast, according to the National Oceanographic and Atmospheric Administration.

The significant moisture, high surface winds, and associated severe weather these planetary features bring makes being able to predict them important to the Navy and Marine Corps. For example, the 2010 Maya Express contributed to Washington, D.C.’s “Snowmaggedon,” which dropped about 5 feet of snow in the area over approximately four days.

“What makes them a little bit confounding to model is how dynamic they are,” Reynolds said. “They can last up to several days, they can pulse, and small details on their edges can have a big impact on how they evolve.”

Reynolds said current weather models can be off by hundreds of kilometers even for short forecasts of just a few days.

“There is a lot about them we still need to understand, especially the ocean and air interactions,” she said. “We have a basic knowledge, but still have to get to the details.”

Reynolds and James Doyle, Ph.D., senior scientist in NRL’s marine meteorology division use sophisticated methods called adjoints to discern how the forecasts of these rivers are very sensitive to small changes in the structure of the rivers.

Reynolds said the adjoint tools are not unique, but are among the most complete and highest fidelity in the world. The team’s adjoints will be put to the test in 2020 when NRL will collaborate with other agencies to get live data on atmospheric rivers.

Going for a river cruise

In early 2020, NRL is on track to participate in an Eastern Pacific field project, led by the Scripps Institute of Oceanography at the University of California, San Diego, to collect in situ observations of atmospheric rivers. Researchers sample in situ observations directly in the environment, vice using remote means such as satellites. NRL participated in similar field programs in 2016, 2018 and 2019.

During the project, NRL’s adjoint modeling system will be used to direct the U.S Air Force’s “Hurricane Hunter” WC-130J aircraft. The goal is to provide the optimal flight paths for the Hurricane Hunters to use their onboard sensors and deploy instrumented packages with parachutes known as dropsondes.

In situ observations are highly valuable. NRL meteorologists developed a technique, called the Forecast Sensitivity/Observation Impact, to measure each data point’s impact on reducing forecast error and to better understand biases in their weather models.

“Direct observations of actual weather conditions in these atmospheric rivers can have an outsized impact on our forecasts,” Reynolds said. “In the past, we’ve shown that having at least two aircraft collecting observations can reduce our 24-hour forecast error as much as the entire North American radiosonde (weather balloon) network.”

NRL’s work on atmospheric rivers is funded by its basic science program, and is scheduled to continue through 2022.

About the U.S. Naval Research Laboratory

NRL is a scientific and engineering command dedicated to research that drives innovative advances for the Navy and Marine Corps from the seafloor to space and in the information domain. NRL headquarters is located in Washington, D.C., with major field sites in Stennis Space Center, Mississippi, Key West, Florida, and Monterey, California, and employs approximately 2,500 civilian scientists, engineers and support personnel.