Shell Chemical Appalachia LLC (Shell) today announced the successful installation of its quench tower – the largest piece of equipment at its Pennsylvania Petrochemicals Complex, currently under construction. The heavy lift of the quench tower, undertaken October 7, marked an important milestone in the project. 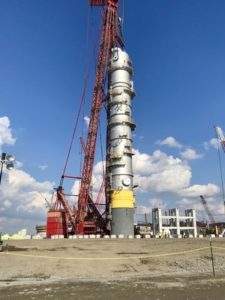 Since the start of main construction in November 2017, Shell has also safely erected two of three reactors associated with the planned polyethylene units and laid around 15 miles of underground pipe for the cooling, firewater and drainage systems.

The project is bringing economic growth and jobs to the region, with some 3,000 workers on site today. That number will likely increase to 6,000 by the end of 2019 through its construction phase. Shell expects around 600 onsite jobs when the complex is completed.

At approximately 2,000 tonnes and 87-metres-tall, the quench tower spent nearly three and a half weeks being towed up the Mississippi and Ohio rivers. Upon arrival in Pennsylvania, it was unloaded onto a dock and transported down a newly-created road – both specially-designed to handle the large quench tower.

In May 2018, Shell introduced its Shell Polymers line of business to customers.

Cautionary Note
The companies in which Royal Dutch Shell plc directly and indirectly owns investments are separate legal entities. In this release “Shell”, “Shell group” and “Royal Dutch Shell” are sometimes used for convenience where references are made to Royal Dutch Shell plc and its subsidiaries in general. Likewise, the words “we”, “us” and “our” are also used to refer to subsidiaries in general or to those who work for them. These expressions are also used where no useful purpose is served by identifying the particular company or companies. ”Subsidiaries”, “Shell subsidiaries” and “Shell companies” as used in this release refer to companies over which Royal Dutch Shell plc  either directly or indirectly has control. Entities and unincorporated arrangements over which Shell has joint control are generally referred to as “joint ventures” and “joint operations” respectively.  Entities over which Shell has significant influence but neither control nor joint control are referred to as “associates”. The term “Shell interest” is used for convenience to indicate the direct and/or indirect ownership interest held by Shell in a venture, partnership or company, after exclusion of all third-party interest.

With respect to operating costs synergies indicated, such savings and efficiencies in procurement spend include economies of scale, specification standardisation and operating efficiencies across operating, capital and raw material cost areas.

We may have used certain terms, such as resources, in this release that United States Securities and Exchange Commission (SEC) strictly prohibits us from including in our filings with the SEC.  U.S. Investors are urged to consider closely the disclosure in our Form 20-F, File No 1-32575, available on the SEC website www.sec.gov.