Nashville, Tenn. (April 20, 2020)–Wayne Warner, the artist behind the 2006 “Turbo Twang” country line dance phenomenon, drops the mic, and does so loudly, in his recently released autobiography, “Backstage Nashville: The Undisclosed Story of a Major Label Recording Artist.” Masterfully written, Warner provides a first-hand account of his personal journey into stardom, from his humble hometown in Vermont to the major labels of Nashville’s recording industry. Never one to mince words, Warner unapologetically draws back the curtain on the music business and reveals the startling realities about his life in the country music spotlight. For more information, or to purchase the book, please visit WayneWarner.com. 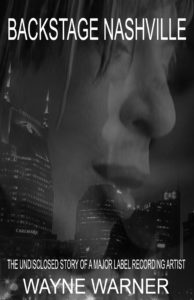 With brutal honesty, Warner details the inner struggles and personal triumphs of a man catapulted to a level of fame for which he was not prepared. While millions of fans across the globe were learning the dance steps to his latest single, Wayne grappled with internal demons–addiction, self-doubt, and the juxtaposition of Wayne, the man (who wanted nothing more than to be home with his kids), and Wayne Warner, the “untouchable star,” whose success had been brokered, at least partially, through industry politics, the “good ‘ole boy network,” and shady backroom deals.

“Walking off the stage and up the ramp back to the bus, people rushed the fence reaching for the ‘Turbo Twanger,’ asking for autographs, photos, trying to reach through to shake my hand, get a high five, and even hand me gifts. I was thrilled, I was humbled, I was baffled. I was honored, and I was terrified to the core.”

Warner’s creation of this book did not come without careful consideration because there are certain elements of the business that are rarely disclosed–and for good reason. However the former Atlantic Records/B Venturous recording artist came to realize that if he didn’t write it, someone else would. Because of this, Wayne felt obligated to be unabashedly forthright about everything. He digs deep and reveals how he grew up a target of bullying, his struggle with addiction, his concerns and joys of adopting two African-American children, and how all of these affected his country music career.

“Backstage Nashville” provides a rare and unique look at the country music industry, intimately told from a recording artist’s point of view that will put you in the studio with Harold Shedd, behind the microphone with Taylor Swift and Bonnie Tyler, in the boardroom with Frank Bell, Barry Coburn, and Al Cooley, rubbing shoulders with big-wigs like Scott Borchetta, Bob Saporiti, and Tim Dubois, and on a journey that might forever change the way you think about the music business.